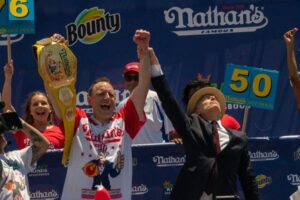 Below in this page, we will be exploring on the winner of Nathan’s Hot Dog contest for 2022 as the annual contest is back this year and among several other contestants, one person surely wins the Nathan’s hot dog eating contest.

So below, find out the winner of the contest and how much the winner bags home.

About the winner of Nathan’s Hot Dog contest for 2022, it was won by Joey at the end after a tough competition at the Men’s Nathan hot dog eating contest. Joey ate 63 hot dogs in total while Miki Sudo who won for the Women’s categor ate 40 hot dogs and took the title of the winner from Michelle Lesco who won the competition last year.

How much money does the winner get?

Now about the prize money, according to Sporting News, men’s and women’s competitions get a top prize of $10,000 each.