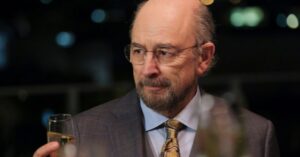 The ABC series, The Good Doctor is back with a new and it’s final season, the season 5 of the series has been anticipated and a new rumor is Speculating about the season that a Character would die.

The upcoming season has all the goodies as the season gives fans a happy moment with the wedding of Shaun and Lea and a bad news as one of the loved Character won’t be coming back for Season 6.

Who could die in ‘The Good Doctor’ Season 5 finale?

At first many viewers might think that the character would be Glassman but it isn’t but it will be another minor Character just like Chicago Med teased a character death a few seasons ago and it only turned out to be a recurring character.

We think that the character might be the nurse  Dr Kim is helping as the series has a subplot for the character who is one of the nurses, a victim of domestic violence.

It’s possible that the poor nurse could be found and/or attacked by her abusive boyfriend, which would wrap up that storyline in the most tragic way.

We also think that it’s her parents who had been showing up in the last season and Dr. Asher Wolke father is dying and the series would kill off the doctor’s parents.

But still whatever that happens, The Good Doctor is once again pulling on people’s heartstrings, and it will definitely dampen the excitement from Shaun and Lea’s long-awaited wedding.