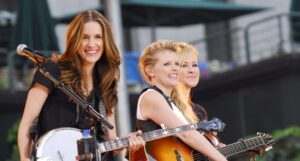 Below in this page, we will be talking about what happened at the Indianapolis Show as the Chicks had to recently stop their Indianapolis concert after only 30 minutes of the show.

It’s a shame to hear about the show’s cancellation by the pool group that’s been on tour since June 14th and amid that, a video of the event showing the lead vocalist, Natalie Maines struggling with her voice on the stage has gone viral.

The pop group are on tour and have been playing songs from their latest album, Gaslighter, in their recent shows but on Sunday, June 19, at Indianapolis’ Ruoff Music Center in Indiana, where they had performed z unfortunately it was cancelled after 30 minutes performance.

The country trio had to leave the stage early and they have also issued an apology for abruptly cutting short their Indianapolis concert, promising fans that they will be back in the city.

“Indianapolis, we are so sorry we could not give you the show you deserved OR the show we wanted to give you,” the statement reads. “We will be back Indianapolis!! Hold onto your tickets,”

As to what happened in the concert, we know that Natalie was struggling with her voice and the singer tries one more song but her voice sadly fails her, so at some point she said

“Waiting for the shot to kick in — not a shot of alcohol, a shot of steroids,”

She also said, “I’m so sorry, I just can’t pull it off,” at the end of the video before leaving the stage.

And according to a concertgoer who posted a video on Twitter of Natalie telling the crowd they’ll “all get tickets” to the rescheduled Indianapolis show.

No doubt that the BBC series, The History of Sherwood Killer Robert Boyer is a good crime drama and below...