VIDEO: PLAYBOI CARTI FALLS OFF STAGE AT WIRELESS CONCERT AFTER RAGING TOO HARD

VIDEO: PLAYBOI CARTI FALLS OFF STAGE AT WIRELESS CONCERT AFTER RAGING TOO HARD 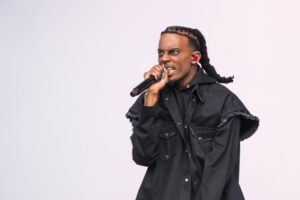 Today is good for laughs, it’s a good day along with today being the Independence of the United States but also for some funny events.

Not that I’m mocking the rapper Playboy carti but it’s no doubt that the clip is funny at first and maybe the second you start to feel bad for the unfortunate incident that occurred at the first dates of Wireless Concert where rapper, Playboy Carti fall on stage after ragging to hard.

PlayBoi Carti was lost in the performance that he fell off the stage but thankfully, he was seemingly uninjured and continued his performance in high spirits.

The Wireless concert at Crystal Palace Park features many hip hop mega-stars like; A$AP Rocky, J. Cole, and Tyler, The Creator and others and the unfortunate incident occurred when Playboy Carti was performing but like we knkwPerformances don’t always go as planned and we are sorry for what happened to him, it was just a minor mishap after running backwards off the stage.

Watch the Fall clip Below.

Playboi Carti fell off stage while performing at Wireless Festival in the UK. pic.twitter.com/gEVcOalPA2

Users have turn the fall in to a joke as a new meme have been trolling Online after the video captured by a fan was shared online.

In the clip, you’ll see that PlayBoi might have forgotten that the walkway was so short, or he was just too immersed in his performance but the good news is the rapper wasn’t too injured that it delayed his set, though it does look like a nasty fall onto his knees but on the stage, He simply got up with a huge grin and continued to hype up the crowd.