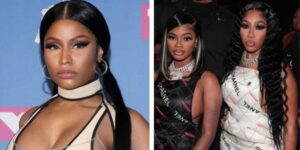 Nicki Minaj is trending right now, after she suprised fans with a live chat with Kevin Samuels.

The rapper is currently trending again as she became the center of conversation following her interview on The Morning Hustle, during which she spoke about her beef with the City Girls and that is what we will cover in this page.

During her interview, she was asked if she would ever do a record with the City Girls which she seemed hesitant at first to respond but then she explained;

“What I will say is that, a few years ago, I saw a video of them and I asked someone on their team at the time about them. I was thinking about jumping on a record, one of their records that was out at the time. And then, social media happened.”

Without getting into the details of it, the rapper said she felt she was being targeted on the Internet.

Rapper wouldn’t reveal what happened with the hip hop duo

Nicki further explained she wouldn’t go out to dinner with somebody if she knew they spoke ill of her. But, she refrained from sharing all the details about what caused the beef between the City Girls and her.

“If you hear somebody was saying things about you, not just one thing, but repeated tweets for years, why would I work with someone that doesn’t like me?”, the rapper said.

Nicki did not disclose what exactly the City Girls had said about her. She only claimed that she heard a few things from sources close to the hip-hop duo.

The singers have squashed their beef

A few hours after the Interview started making rounds on the Internet and fans started to side with their favorite artists, Nicki Minaj, Yung Miami and JT cleared the air.

All three singers shared individual tweets expressing they are willing to let go of the differences and move on.

Responding to the above tweet, Yung Miami wrote: “Queen tingz”.

THE SMOKING HOT BLICK BLICK VIDEO BY COI LERAY AND NICKI MINAJ FLOORS FANS Have you seen the new Music...

WHAT IS NICKI MINAJ’S ‘PUFF PUFF PASS’ SONG THAT’S GOING VIRAL ON TIKTOK? TikTok is drooling over the viral trend...