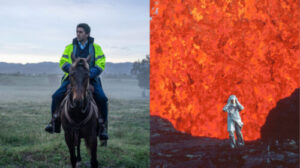 Toda, we got reports that the the Action drama Moro will be open chapters of Auckland, Wellington, Christchurch and Dunedin New Zealand International Film Festival.

So both Moro and FIRE OF LOVE will open the New Zealand International Film Festival with the chapters of Auckland, Wellington, Christchurch and Dunedin

So the anticipated documentary “Fire of Love” will open all other festival locations, which include Gore, Hamilton, Hawke’s Bay, Masterton, Matakana, Nelson, New Plymouth, Palmerston North, Tauranga and Timaru.

The New Zealand International Film Festival has been scaled back this year with plans to return to pre-pandemic levels in 2023 after delay cause of the pandemic, will run across its multiple locations between July 28 and September 4, 2022 and right now applications submitted to the second Red Sea Film Festival In Saudi Arabia (December 1-10) is open until August 14, 2022. Filmmakers from Asia and Africa, including the Arab world, are invited to submit films.