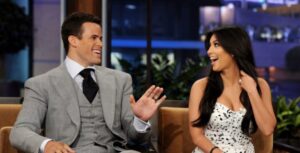 Below in this page, we will explore on the remark International model, Kim Kardashian had made that spark conversation and confused fans, and many others like Kourtney Kardashian’s ex, Scott Disick.

Kim Kardashian had made a claim about her second wedding on National television, she used the term gay but at same time, she did not mention Kris name of speak about his personality but that does not stop the internet to be asking if really Kris Humphries is Gay.

Below in this page, you’ll have your answer and find out more about what Kim said.

During the 5th episode of the Kardashians, Kim Kardashian made a remake on second wedding and she used the word “gay wedding”

During her practice for the second wedding speech for her gay friends, Simon Huck and Phil Riportella, Kim goes on to say,

“I love a gay wedding, I haven’t been to one since my second wedding.”

The internet never stops as they recap on Kim’s second marriage which was to NBA star Kris..

However it should be noted that she did not even mention Kris’ name or his sexuality, but still her comment has led to many fans wondering if the former basketball star is gay and people are contemplating on Kim and Kris’ past relationship.

In this page, we will expore on Kim Kardashian dress at Met Gala 2022 as the model rocked Marilyn Monroe's...

WHO IS BOWEN YANG AS CLIP OF KIM KARDASHIAN ASKING FOR A PIC GOES VIRAL?

In this page, let's explore on the viral clip of Bowen Yang with Kim Kardashian and reveal on who Bowen...