IS NEW AMSTERDAM ENDING OR RENEWED FOR SEASON 5? 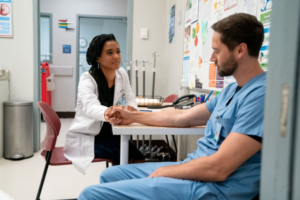 Below in this page, we will explore on the fate Beyond the 5th season of drama series, New Amsterdam as viewers continue to enjoy the 4th season of the series that promised fans  ‘more joy’ for its characters after the toughest of year.

Fans has always called out on the fate of the New Amsterdam hospital and from this new season season let’s tell if the NBC serie is really ending or not.

It’s a Yes, as much as fans don’t appreciate, it has been announced by Deadline that New Amsterdam will be coming to an end but that’s won’t be the end as it’s been also confirmed that the show would be renewed for season 5.

The fifth season will be the final season and this would be this 2022/23 TV season.

New Amsterdam season 5 will run for a final 13 episodes before concluding for good.

DID NEW AMSTERDAM’S ANUPAM KHER DIE? FANS CONCERNED AFTER VIJAY’S EXIT The New Amsterdam fandom has been increasingly worried over...

IS NEW AMSTERDAM ENDING OR RENEWED FOR SEASON 5?

IS NEW AMSTERDAM ENDING OR RENEWED FOR SEASON 5? Season 4 of New Amsterdam promised to bring ‘more joy’ for...