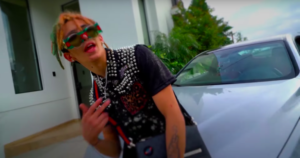 Below in this page, we send out tribute to Outrapstar the cousin of rapper Lil Pump who waa reported dead on Wednesday, May 25th.

As per the Sun, rapper Ohtrapstar who is popular for his 2018 song Choppa and also the cousin of fellow rappers Lil Pump and Lil Ominous had passed away at the age of 23.

The social media was flooded with tribute from fans and friends after his death news spreaded online.

See how the rapper died below.

How did rapper Ohtrapstar die?

According to the Miami Police, Ohtrapstar whose real name is Ernesto Enrique Carralero died in a car crash along with two other passengers on the morning of Wednesday May 25th.

The South Florida rapper, was in the car alongside another male passenger, Candido Miguel Barroso-Nobarse, 22, and a 23-year-old female passenger named Bayle Pricilla Bucceri and unfortunately the car burst into flames after crashing into a Miami house.

“Basically, at 5:00 am, we received a call of a vehicle crash  – a vehicle that was overturned and crashed into a house.”

“To be more specific, it crashed into a bedroom of a house.”

Michael also revealed that Ohtrapstar and his female companion were pronounced dead on the scene, while the other male passenger was pronounced deceased at the Jackson Memorial Hospital.

ValidnewsToday send out it’s tribute to the family and Wellwishers of rapper Ohtrapstar.