DEBUNKED: WILL THE CERN COLLIDER CREATE A BLACK HOLE?

DEBUNKED: WILL THE CERN COLLIDER CREATE A BLACK HOLE? 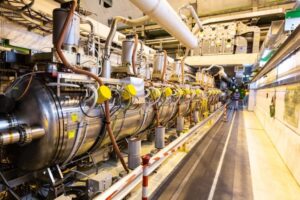 Below in this page, we will be exploring on one of the many theories that been going viral online about the CERN LHC experiment that will restart today July 5th 2022.

There have bee some wild conspiracy theories about black holes, portals opening and the end of the world over the LHC experiment today but it’s not real as CERN says that the creation of black holes at the Large Hadron Collider is “very unlikely” but it is possible that the LHC may form “tiny ‘quantum’ black holes”.

The LHC project is a huge project that allows physicists to test different theories of particle physics safely and it was first turned on in September 2008 but had to shut down in 2018  for planned maintenance and upgrades after running for a whole decade.

So today CERN restart the LHC project and this will run continuously for four years at a record energy of 13.6 trillion electronvolts, colliding beams of protons at each other with higher energy than ever before.

According to the official website, the creation of black holes at the Large Hadron Collider is “very unlikely” but it is possible that the LHC may form “tiny ‘quantum’ black holes” but you should know that these are not black holes in the cosmological sense but a different kind of black hole.

The black hole according to CERN is;

“They concentrate a very large amount of matter in a very small space. They are so dense that the gravity they exert is such that not even light can travel out of them,”