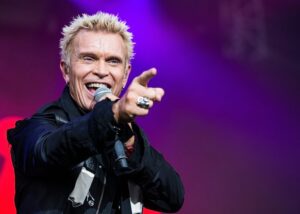 Below in this page, we will be exploring ok the tickets for the grand tour of the singer and song writer, Billy Idol.

Today, the Singer announced the rescheduled dates for his upcoming tour, the Previous date was pushed back due to complications with his idol as you know the singer uas battle with his health over the last few months.

Below is everything we know on the topic.

The upcoming legs of The Roadside Tour dates that supposed to hit venues in the UK and Europe this Autumn has been postponed due to health challenges he has been facing this year.

From the official website of the singer, he Revealed that his health problems are “nearly but not quite resolved” which led to his doctor giving him orders to stay off the road until August.

His health issues began in February 2022, and the singer revealed to his fans that he had  undergone the second part of his sinus surgery with the aim to remove infection and blood clots as he had an MRSA infection which was “resistant to most antibiotics.”

Amid the change in legs of The Roadside Tour dates, his appearance at Sweden’s Toreboda Festival has also been cancelled but luckily for us, the tour still holds.

See full information about the new tour dates, which kick off on September 23rd in Germany, on the website here.